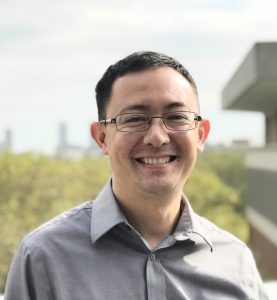 Nate Wynne joined the staff at the Center for the Study of Religion and American Culture in May of 2015. He received an M.S.Ed. from Indiana University, Bloomington (2017) and has both a BA in Religious Studies and a BA in English with a concentration in Linguistics from IUPUI (2015). As Program Coordinator, Nate manages the Center’s social media presence and official website, provides graphic design services for advertising, assists with event planning and financial processing, and serves as assistant editor for the Center’s publications including Religion and American Culture: A Journal of Interpretation (2015-2017) and The Bible in American Life (2017). Nate is committed to public education, outreach, and supporting awareness of the Center’s programs and research.