RAAC IUPUI > About > The Center for the Study of Religion & American Culture > Our Staff > Peter J. Thuesen 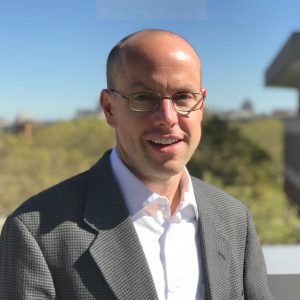 Peter J. Thuesen, Director of Humanities Research, is Professor of Religious Studies at IUPUI and co-editor of Religion and American Culture: A Journal of Interpretation. From 2009 to 2015, he chaired IUPUI’s Department of Religious Studies.  A historian of American religion and the Christian tradition, he is author, most recently, of Tornado God: American Religion and Violent Weather (Oxford, 2020). His previous publications include Predestination: The American Career of a Contentious Doctrine (Oxford, 2009; paperback, 2011), which received the 2010 Christianity Today Book Award for History/Biography; The Works of Jonathan Edwards, Volume 26, Catalogues of Books (Yale, 2008), the final volume in the Yale edition founded by Perry Miller in 1953; and In Discordance with the Scriptures: American Protestant Battles over Translating the Bible (Oxford, 1999; paperback, 2002), which received the Frank S. and Elizabeth D. Brewer Prize of the American Society of Church History.  He is also co-editor (with Philip Goff and Arthur E. Farnsley II) of The Bible in American Life (Oxford, 2017).  Educated at Princeton University (Ph.D., M.A.) and the University of North Carolina at Chapel Hill (B.A.), he previously taught at Tufts University and at Yale Divinity School.  He has received grants and fellowships from the Woodrow Wilson National Fellowship Foundation (Mellon Fellow), the Mrs. Giles Whiting Foundation, the National Endowment for the Humanities, the Louisville Institute, and the Cushwa Center for the Study of American Catholicism at the University of Notre Dame.