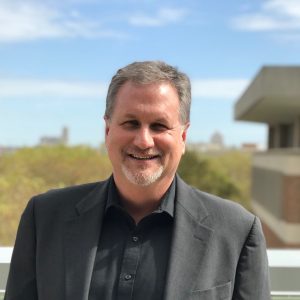 Philip Goff, Chancellor’s Professor of American Studies, has been the executive director of the Center for the Study of Religion and American Culture since 2000.

Goff’s research specialization is American religious history, with eight books and over 200 articles, reviews and scholarly papers in that area. His recent books include: Civil Religion in America: Religion and the American Nation in the Twenty-First Century (with Rhys Williams and Raymond Haberski), The Bible in American Life (with Arthur Farnsley II and Peter Thuesen), and Religion and the Marketplace in the United States (with Jan Stievermann and Detlef Junker).

Goff has served as a legal consultant for church-state cases, co-authored amicus briefs for cases before the Federal Supreme Court, and been an expert witness in legal cases involving religious groups. Dedicated to public teaching, he has been a scriptwriter, consultant, and interviewee for documentaries related to religion in American life for PBS, BBC, and HBO. Answering questions about religion in North America on national and international news and radio programs, as well as in national newspapers, he is recognized as a leading interpreter of religion’s role in American life. In recent years he was named to Who’s Who Among Teachers, Who’s Who in America, and Who’s Who in the World.

Professor Goff obtained his bachelor’s degree at Nyack College in Religious Studies. He received his MA in Religious Studies from the University of Kansas, where he specialized in method and theory in the study of religion. He completed a PhD in American Religious Studies at the University of North Carolina, Chapel Hill in 1993. Later that year, he joined the Department of History at California State University, Los Angeles, where he also directed the Social Sciences Major and the Liberal Studies Program at various times. In 2000 he initially joined the faculty of the Department of Religious Studies at Indiana University-Purdue University Indianapolis. He moved to American Studies upon the creation of doctoral program there, where he teaches, directs the Center for the Study of Religion and American Culture, and is lead co-editor the journal Religion & American Culture: A Journal of Interpretation. He is also an adjunct professor in history and religious studies.