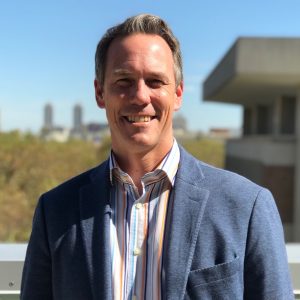 Raymond Haberski, Jr. is Professor of History and Director of American Studies at IUPUI. He also directs the Institute for American Thought and is part of the Center for the Study of Religion and American Culture. For the 2008–2009 academic year he held the Fulbright Danish Distinguished Chair in American Studies at the Copenhagen Business School. Haberski is trained in twentieth century U.S. history with a focus on intellectual history and his books include It’s Only a Movie: Films and Critics in American Culture (2001), Freedom to Offend: How New York Remade Movie Culture (2007), The Miracle Case: Film Censorship and the Supreme Court (2008), God and War: American Civil Religion Since 1945 (2012), Voice of Empathy: A History of Franciscan Media in the United States (2018), with Andrew Hartman, eds., American Labyrinth: Intellectual History for Complicated Times (2018), and with Philip Goff and Rhys Williams, eds., Civil Religion Today (2021). With Andrew Hartman, he is co-host of the podcast Trotsky and Wild Orchids.