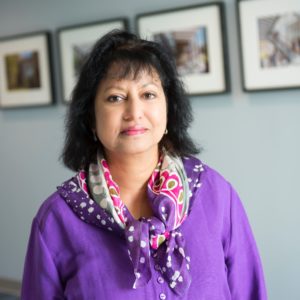 Asma Afsaruddin (Ph.D. Johns Hopkins University) is Professor of Middle Eastern Languages and Cultures in the Hamilton Lugar School of Global and International Studies, and also Adjunct Professor of Religious Studies and Affiliated Professor of Gender Studies at Indiana University, Bloomington. She is the author and editor of seven books and has written over seventy articles and book chapters on topics as diverse as Qur’anic hermeneutics, pluralism in Islamic thought, and issues that impact the lives of contemporary American Muslims. Her research has been funded, among others, by the Harry Frank Guggenheim Foundation and the Carnegie Corporation which named her a Carnegie Scholar in 2005.

In 2019, Professor Afsaruddin was inducted into the Johns Hopkins Society of Scholars in recognition of her academic and professional achievement since receiving her PhD from there in 1993. She lectures widely in the US, Europe, the Middle East and south-east Asia and has served as an advisor to the Pew Forum on Religion and Public Life, the US State Department, and the United States Institute of Peace.  She is a past member of the Board of Directors of the American Academy of Religion and former chairperson of the Department of Middle Eastern Languages and Cultures at IU. In a number of her classes, Afsaruddin deals with the particular challenges faced by American Muslims as they confront increasing Islamophobia in the aftermath of September 11 and the 2016 presidential elections.