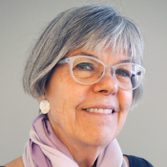 Marianne S. Wokeck (Ph.D Temple University) is Chancellors Professor Emerita of History, former Director of the Institute for American Thought, and past president of the IUPUI Faculty Council. Educated in Germany and the United States, her major research has been in the history of the North Atlantic World with a focus on immigration ethnicity, and identity with special interest in the role of religion. A published author and scholarly editor, she has also collaborated on The Papers of William Penn; Lawmaking and Legislators in Pennsylvania; and The Works of George Santayana.