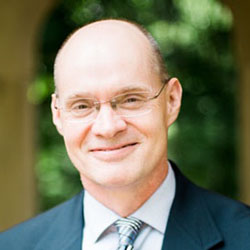 Paul Gutjahr (Ph.D University of Iowa) is Ruth N. Halls Professor of English at Indiana University. He also holds adjunct appointments in American Studies and Religious Studies. Along with numerous articles and book chapters, he is the author of “An American Bible: A History of the Good Book in the United States, 1777-1880” (1999), “Charles Hodge: Guardian of American Orthodoxy” (2011), and “The Book of Mormon: A Biography” (Princeton UP, 2012). He has also co-edited “Illuminating Letters: Essays on Typography and Literary Interpretation” (2001) and edited two major anthologies: one on American Popular Literature of the Nineteenth-Century and the other on American Bestsellers in the Nineteenth Century. He has also served as the sole editor for the “Oxford Handbook of the Bible in America” (2017). One of his next projects is what he is calling his UFO theology project: the study of American Religious Traditions and their beliefs concerning life on other planets.