Religion & Jackie Robinson and the Long Shadow of Integration

Jackie Robinson of the Brooklyn Dodgers played his first game in the major leagues on April 15, 1947, ending the “color line” in baseball and forever changing sport and society. Robinson famously promised Branch Rickey, the team’s president, that he would turn the other cheek when confronted with the hostilities of racial bigotry. How did Robinson’s faith prepare him for the trauma he endured and the sacrifices he made? Moreover, how have the presumed obligations of religious faith and nationalism haunted professional athletes, especially athletes of color, ever since? Major League Baseball will commemorate the 75th anniversary of Robinson’s first game on April 15. However, it will do so once again within the lens of white America alongside the ways in which religion, capitalism, and sport intersect. “Turning the other cheek becomes an expectation of subsequent Black and Brown players,” Professor Carmen Nanko-Fernandez writes, “and martyrdom is a way of domesticating dangerous memories and complicated inconvenient prophets such as Jackie Robinson.” In this episode, the panelists will not only discuss the complicated history and memories of Robinson’s integration of baseball, but they also will address the ways in which American sport has been an especially compelling case to theorize the relationship between race and religion. Join humanities scholars and journalists for a timely and thoughtful conversation at the intersection of American studies, religion, and sport. 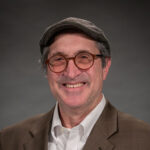 Chris Lamb is chair of the Journalism and Public Relations department. He’s an author, historian, lecturer, satirist, and columnist. Lamb is the author of 11 books, including two that were published in 2020 (The Art of the Political Putdown: The Greatest Comebacks, Ripostes, and Retorts in History (Chronicle Books) and Sports Journalism: A History of Glory, Fame, and Technology (University of Nebraska Press). He’s written extensively on sports, race, and media. Before becoming a college professor, he worked for newspapers and magazines. Since becoming a professor, he’s written about 250 articles and columns for such publications as the New York Times, Wall Street Journal, Washington Post, Sports Illustrated, Los Angeles Times, ESPN.com, and Christian Science Monitor. 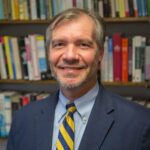 Michael G. Long is the coauthor, with Chris Lamb, of Jackie Robinson: A Spiritual Biography. He’s also the editor of three books on Robinson—First Class Citizenship: The Civil Rights Letters of Jackie Robinson; Beyond Home Plate: Jackie Robinson After Baseball; and 42 Today: Jackie Robinson and His Legacy. Long appeared in Ken Burns’s documentary about Robinson, and his op-eds on Robinson have been published in the Los Angeles Times, the Chicago Tribune, ESPN’s The Undefeated, and USA Today. Farrar, Straus and Giroux will publish his next book on Robinson, a biography for middle graders, coauthored with Yohuru Williams. 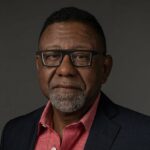 Randal Maurice Jelks is Professor of African and African American Studies and American Studies. He is the author of the two award winning books African Americans in the Furniture City: The Struggle for Civil Rights Struggle in Grand Rapids  and Benjamin Elijah Mays, Schoolmaster of the Movement: A Biography. His latest book is titled Faith and Struggle in the Lives of Four African Americans: Ethel Waters, Mary Lou Williams, Eldridge Cleaver and Muhammad Ali. Jelks has recently contributed to a collection of essays titled 42 Today: Jack Robinson and His Legacy edited by Michael Long. His forthcoming book is Letters to Martin: Meditations on Democracy in Black America (Lawrence Hill Books, Chicago, Fall 2021). His writings have appeared in the Boston Review, the Los Angeles Review of Books as well as blogs, journals, newspapers, and periodicals. He is the co-editor of the academic journal American Studies. Jelks serves an executive producer of a documentary film I, Too, Sing America: Langston Hughes Unfurled directed by Kevin Willmott,  2019 Academy Award co-winner best screenplay adaptation BlacKkKlansman. 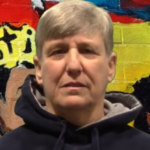 Carmen M. Nanko-Fernández, Professor of Hispanic Theology and Ministry at the Catholic Theological Union in Chicago

Carmen M. Nanko-Fernández is Professor of Hispanic Theology and Ministry at the Catholic Theological Union in Chicago. A Latin@́ theologian, her publications include the book Theologizing en Espanglish (Orbis), chapters, and articles on Latin@́ theologies, lo popular, sport and theology—with particular focus on béisbol/baseball, as well as developing research on Pope Francis and sports. She created, coordinates, and is an author for the Theology en la Plaza column in the National Catholic Reporter and her writing has appeared in Commonweal. Carmen is the founding co-editor of the multivolume series Disruptive Cartographers: Doing Theology Latinamente (Orbis). She is also completing her book ¿El Santo? Baseball and the Canonization of Roberto Clemente (Mercer University Press).