The Bible in American Life 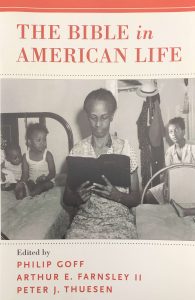 There is a paradox in American Christianity. According to Gallup, nearly eight in ten Americans regard the Bible as either the literal word of God or the inspired by God. At the same time, surveys have revealed gaps in these same Americans’ biblical literacy. These discrepancies reveal the complex relationship between American Christians and Holy Writ, a subject that is widely acknowledged but rarely investigated.

The Bible in American Life is a sustained, collaborative reflection on the ways Americans use the Bible in their personal lives. It also considers how other influences, including religious communities and the internet, shape individuals’ comprehension of scripture. Employing both quantitative methods (the General Social Survey and the National Congregations Study) and qualitative research (historical studies for context), The Bible in American Life provides an unprecedented perspective on the Bible’s role outside of worship, in the lived religion of a broad cross-section of Americans both now and in the past.

The Bible has been central to Christian practice, and has functioned as a cultural touchstone, throughout American history, but too little is known about how people engage it every day. How do people read the Bible for themselves outside of worship? How have denominational and parachurch publications influenced the interpretation and application of scripture? How have clergy and congregations influenced individual understandings of scripture? These questions are especially pressing in a time when denominations are losing much of their traditional cultural authority, technology is changing reading and cognitive habits, and subjective experience is continuing to eclipse textual authority as the mark of true religion.

From the broadest scale imaginable, national survey data about all Americans, down to the smallest details, such as the portrayal of Noah and his ark in children’s Bibles, this book offers insight and illumination from scholars across the intellectual spectrum. It will be useful and informative for scholars seeking to understand changes in American Christianity as well as clergy seeking more effective ways to preach and teach about scripture in a changing environment.

2. “America’s First Bible: Native Uses, Abuses, and Re-uses of the Indian Bible of 1663” by Linford D. Fisher
3. “The Debate over Prophetic Evidence for the Authority of the Bible in Cotton Mather’s Biblia Americana” by Jan Stievermann
4. “Navigating the Loss of Interpretive Innocence: Reading the ‘Enlightenment’ Bible in Early Modern America” by Robert E. Brown
5. “Reading the Bible in a Romantic Era” by Beth Schweiger
6. “The Origins of Whiteness and the Black (Biblical) Imagination: The Bible in the ‘Slave Narrative’ Tradition” by Emerson B. Powery
7. “Biblical Women in the Woman’s Exponent: The Bible in Nineteenth-Century Mormonism” by Amy Easton-Flake
8. “Scriptualizing Religion and Ethnicity: The Circle Seven Koran” by Sylvester Johnson
9. “Reading the Bible in War and Crisis to Know the Future” by Matthew Avery Sutton
10. “Reference Bibles and Interpretive Authority” by B.M. Pietsch
11. “The Soul’s Train: The Bible and Southern Folk and Popular Music” by Paul Harvey
12. “Where Two or Three are Gathered: The Adult Bible Class Movement and the Social Life of Scripture” by Christopher D. Cantwell
13. “The Word is True: King James Onlyism and the Quest for Certainty in American Evangelical Life” by Jason A. Hentschel
14. “Selling Trust: The Living Bible and the Business of Biblicism” by Daniel Vaca
15. “The Bible and the Legacy of First Wave Feminism” by Claudia Setzer
16. “Let Us Be Attentive: The Orthodox Study Bible, Converts, and the Debate on Orthodox Lay Uses of Scripture” by Garrett Spivey

17. “The Continuing Distinctive Role of the Bible in American Lives: A Comparative Analysis” by Corwin Smidt
18. “Emerging Trends in American Children’s Bibles, 1990-2015” by Russell W. Dalton
19. “The Curious Case of the Christian Bible and the U.S. Constitution: Challenges for Educators Teaching the Bible in a Multi-Religious Context” by John F. Kutsko
20. “Transforming Practice: American Bible Reading in Digital Culture” by John B. Weaver
21. “Readers and their E-Bibles: The Shape and Authority of the Hypertext Canon” by Bryan Bibb
22. “How American Women and Men Read the Bible” by Amanda Friesen
23. “Feels Right Exegesis: Qualitative Research on How Millennials Read the Bible” by J. Derrick Lemons
24. “Crowning the King: The Use of Production and Reception Studies to Determine the Most Popular English-Language Bible Translation in Contemporary America” by Paul Gutjahr
25. “Literalism as Creativity: Intertextuality in Making a Biblical Theme Park” by James S. Bielo
26. “The Bible in the Evangelical Imagination” by Daniel Silliman
27. “Feeling the Word: Sensing Scripture at Salvation Mountain” by Sara M. Patterson

Arthur E Farnsley II is director of the Indiana University Center for Civic Literacy and Associate Director of the Center for the Study of Religion and American Culture at IUPUI. His books have been about the politics of the Southern Baptist Convention, the role of congregations in faith-based welfare reform, and the ways religious culture shapes and is shaped by urban growth and development. His popular writing has appeared in Christianity Today, Christian Century, and in newspapers across the country, as well as in his most recent book, Flea Market Jesus.

Peter J. Thuesen is Professor of Religious Studies at IUPUI and Co-Editor of Religion and American Culture: A Journal of Interpretation. His publications include Predestination: The American Career of a Contentious Doctrine (OUP) and In Discordance with the Scriptures: American Protestant Battles over Translating the Bible (OUP).