RAAC IUPUI > About > The Center for the Study of Religion & American Culture > Our Staff > Arthur E. Farnsley 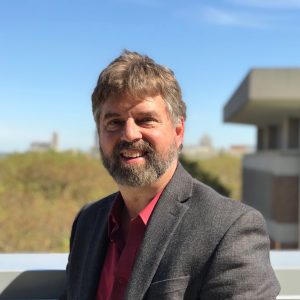 Arthur E. Farnsley II is Senior Research Fellow of the Center, Research Director for Religion and Urban Culture 2.0 and data evangelist for the Association of Religion Data Archives. He served as Executive Officer of the Society for the Scientific Study of Religion (SSSR) from 2007-2016. An expert in American religion and civil society, his books include The Bible in American Life (Oxford University Press, 2017), Flea Market Jesus (Cascade Books, 2012); Sacred Circles, Public Squares: The Multicentering of American Religion (Indiana University Press, 2005); Rising Expectations: Urban Congregations, Welfare Reform, and Civic Life (Indiana University, 2003); and Southern Baptist Politics: Authority and Power in the Restructuring of an American Denomination (Pennsylvania State University, 1994). His articles have appeared on the cover of both Christian Century and Christianity Today magazines.

He directed, with Professor Edward Curtis, the National Endowment for the Humanities Bridging Cultures grant for instructors at Ivy Tech Community College on “World Religions in Greater Indianapolis” (2015-2017). He has also co-directed many projects for the Center for the Study of Religion and American Culture, including “The Bible in American Life” (2011-14), and an NEH Summer Institute, “The Many and the One: Religion, Pluralism, and American History,” for high school teachers.  Art is a graduate of Wabash College and Yale Divinity School. His PhD is from Emory University.